Welcome to The Healers Café

by Manon Bolliger, facilitator and retired naturopath with 30+ years of practice | The Healers Café | 2 comments 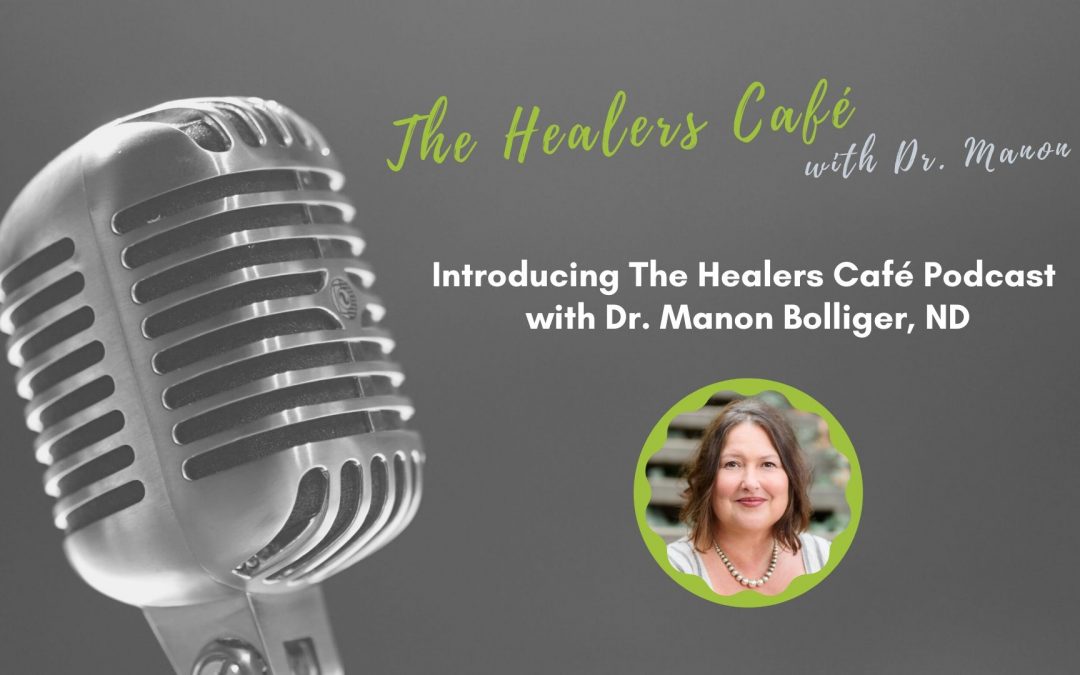 Hi, it’s Dr Manon Bolliger, ND and I want to welcome you to the Healers Cafe.

I am so excited to be doing this series of interviews and what I’ll be doing is, is asking all kinds of healthcare practitioners, doctors, healers of all types, to really share with all of you their experience, why they became healers, what called them what they think about this being a healer thing. Is it, a thing!!  Who’s really healing in this, what they’ve experienced from their interaction with clients and patients and what the takeaways and understanding of what the process of healing is all about and the process of life. So that’s the essence of what I’m doing. I’m hoping that this will serve also for patients that have issues and are looking for different ways of approaching it.

I’ve interviews with all kinds of complementary health practitioners and then some that you may already know about, like chiropractors or physios surgeons, psychiatrists and also some that are less known, like some of the energy workers and things I don’t know about yet.

And then I’m so excited to, to learn and also I’ll be sharing stories from Bowen therapists that I have trained myself or that are practicing it now and have stories to tell. So it’s really the, the goal here for the end user as in the person who needs help is to see who they relate with and what, you know, what the insights of the therapies might be, especially the, the less known ones. And so hopefully that will give you an insight there. And then for practitioners, it’s really to, to have a, a place where we can meet and talk and have discussions on, on all aspects of healing. It’s really conversations on health that I’m looking forward to, to having. And for those who don’t know me, I’ll tell you a little bit about myself. So I have been blessed and that’s a retrospective view with having encountered several health conditions.

So I had turned-in feet when I was born. I also had scoliosis, I developed multiple sclerosis and I had stage four cancer. All of them, were treated naturally at least.

Although the last three. And I became really interested in discovering what we can do to help ourselves and how amazing and powerful our own bodies actually are. So something called innate or intelligent healing that we all have. It’s like, it’s within us. But how do we trigger this? What excites that energy to, to manifest? And for those of you who, when I say the word energy are cringing I was the same.

And one of the areas that when I was doing my master’s at McGill that got me super excited was alternative, so to speak, complementary healthcare. So I was looking at it homeopathy and at the time chiropractor because at that time, which is quite a few years, and I don’t want to date myself it was not that well known. Right. So I wanted to see how did they, how did they become accepted in our society or significantly more accepted? So I was looking at all that and I was looking at how is research done? How’s the end user done? What are the, what are the aspects that take into what are taken into consideration to make decisions for what therapies get seen or not seen? And then as circumstance would have it. I I bumped into after I had done my naturopathic physician training, which, so basically after I finished law school, I  wasn’t quite content.

I wanted to, really be at the, at the level of where movements are made, when people care and when do people care? They care when it’s their, their health, but especially when it’s their health of somebody in their family. And that’s when they really take charge and they want all these things informed consent. They really want to make the right decision. So that’s what really got me going. It’s like, okay, I need to actually be in the same position. Now I’m starting a family. I want to know all the right answers. I’m in. Who do I trust? How do I, you know, how do I understand research? So I started a whole path of really going down the, the way of like, how do I get to know what are the right things and how do I eventually learn to trust myself?

And so that was a long journey. And in that I, I developed many of these conditions I just talked about. But I, I came to a realization with one of these these events when I had my body touched during a physical therapy, I had a huge flashback and that flashback made me realize that the body, actually the nervous system, the fascia holds memory. But at that time there was very little work on this. So I I was like, I’ve got to go down this road. So I ended up being trained by Oswald Rentsch. And and it, it changed my world in part because what he taught seemed relatively simple. After having done naturopathic school and you know, being trained in, being able to do adjustments and to do acupuncture and to give supplements to understand nutrition.

Like there were plenty of things, but what he did was simple. And what happened to me is this flashback and this flashback changed so many things because when I realized this, I realized there was so much more now at that time, partially because of, of their their generation they were really structurally focused and they did not understand what I went through at the, in that moment. And you know, what I went through is total flashback. I was two years old. I was screaming in, in pain, like shrieking, like a frustrated two-year-olds because what I recognize is that my feet were strapped into these two white shoes held apart by this metal bar. And that was like, I saw this in my mind’s eye. And so it was like when I came to my adult self after this treatment, I phoned my mom and she goes, Oh yeah, we got these shoes.

And, you know, so at that point I knew I had to, to take this therapy cause it was more subtle and gentle than what I had learned in school. So, and it’s complimentary to, I don’t want to say, you know, there’s every does something right. You, you show up at the right place, it does, it moves you to the next step. But this is my journey. So what happened to me anyways is I ended up moving to Nova Scotia. And when I opened my practice there, I started seeing patients that had trauma and not just physical trauma, but emotional traumas and people who had experienced abusive relationships and incest. And so here I had this otherwise structural, you know, therapy and I had an, an interest in trauma developed well before this. So the two found peace in me.

And when I went to Nova Scotia, I innovate and I really moved Bowen therapy to a whole other level. So I ended up opening up a college called Bowen college and I teach a form of it called BowenFirst™ therapy. So I call it bone first because my experience is if you do go in first and the other therapy you do, any other intervention has it amplifies the results. And the main reason is because it works with the fascia. It unlocks it, it, it frees up the emotions that are trapped and it puts your body in parasympathetic state, which is that state of rest and relaxation where all healing takes place. So yeah. And so that’s what I’ve done for when I’ve had a practice for 30 years. I’ve seen thousands and thousands of people. It was a word of mouth practice for the majority of time.

I was seeing 150 people a week. It was so rewarding, both emotionally like thrilling and also financially because if you can help that many people, we’re in the system. Money is in the system. And of course I’ve had to deal with those issues too, and most practitioners might understand what I’m talking about. But anyway, I’m, I’m, I’m past it now. I just see the, the beauty of this life. And so anyhow, I’m rambling on the side, but I wanted to let you know the sort of the, the background of what I’m passionate about. And so I also started creating programs for the public a reboot home care kit. I also, which is something that you can do with your family if you have aging parents or you have young children who aren’t sleeping well, are digesting well.

I actually teach a simple,  way of rebooting their body.

The analogy I give is that all systems are, there like a computer, but sometimes it doesn’t, it doesn’t work, right? There’s like circulating balls and Word doesn’t work and PowerPoint is all funky. And so what you do, you, you power off, right? And then you turn it back on, you reboot it and when you reboot it, all the operating systems are working cause we’re not really broken. We’re just like, you know, we’ve been influenced to be off kilter and we, we didn’t have the internal resourcefulness to come back. So by, doing this, this treatment, it just allows the body to go, “Oh, right, I remember, I can heal.” And so anyway, that’s why it’s so exciting. And so I have you know, young teenagers doing this and all kinds of couples doing this.

So I’m really excited about that. And I have a LISTEN program, which is all about listening to your body. And that’s really based on how I, I overcame multiple sclerosis and how I also overcame stage four cancer naturally.  I go into all those details and if you are interested in joining my show here, I also have a way you can just opt in and I have a free series of emails so you don’t have to worry about opting into any other programs, but just to help you along this path. So if that’s of any interest please subscribe and you’ll get that and you know, and we’ll see if if there’s a fit between my mission, your mission and vision and helping this world.

And I really hope that you are able to enjoy and get lots of value out of these amazing interviews.

About The Healers Café:

Dr. Manon’s show is the #1 show for medical practitioners and holistic healers to have heart to heart conversations about their day to day lives.